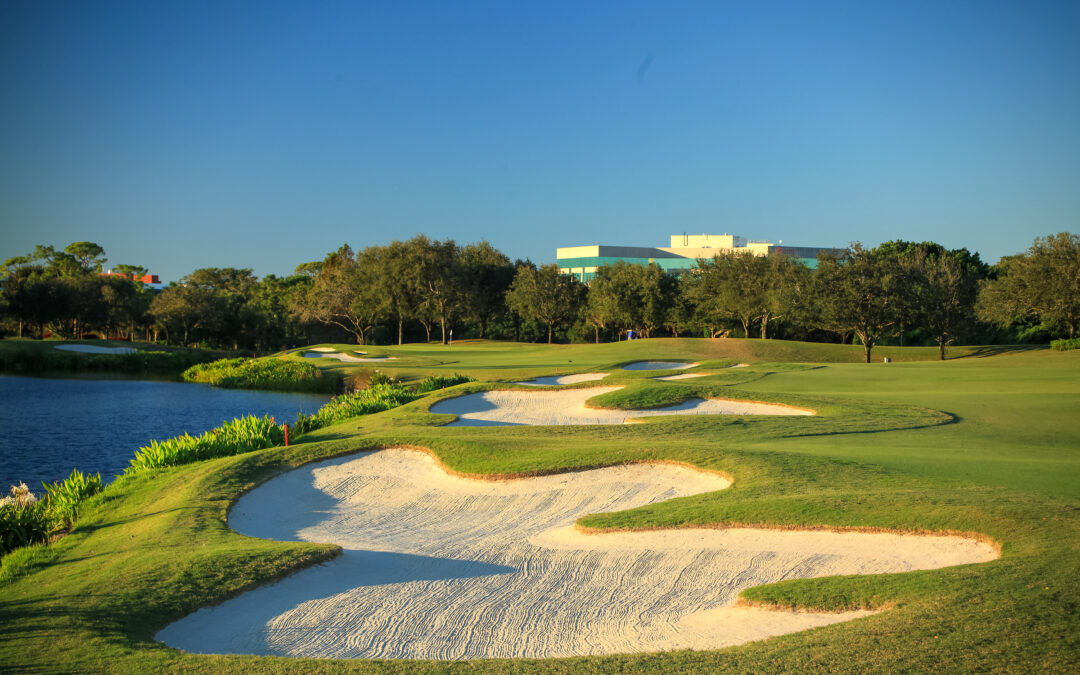 BOCA RATON, FLORIDA – For the past 15 consecutive years the TimberTech Senior Tour Championship has been held at the Old Course of Broken Sound Golf Club in Boca Raton, Florida.

Article By: John R. Johnson – J2Golf.com – To See a full Flip-Book of this article: Click Here

It is not a coincidence that course architect Gene Bates is the master-mind of this outstanding Par 72, 6,807 yard championship tract. Year after year, the players themselves vote the Broken Sound’s greens as the #1 Greens found on the Senior Tour. The award is both a compliment to the green’s design and the outstanding agronomy by Shannon Easter, the Director of Golf Maintenance for Broken Sound.

You will find that the Gene Bates Golf Group designs are well represented at every major tour: PGA, LPGA, Senior, plus PGA of America, the USGA Championships and major tour events worldwide.  Gene is also the designer for the lesser but very important tours such as the Korn Ferry tour and Symetra tour for up and coming men’s and women’s players in the world of golf.

It’s November in Boca Raton Florida, temperatures are in the upper 70’s, humidity is around 50 with a slight breeze.

It’s no wonder that the PGA Senior Tour has selected this time and this place, to start their season and host their TimberTech Boca Raton Championship. The tournament has been hosted here at The Old Course at Broken Sound for 15 consecutive years and is part of the Charles Schwab Cup playoff series.

“He doesn’t really seem to have any weaknesses. It’s bitter-sweet to lose this one, but I told him on the 18th green, I was really happy for him.”

This year, against all odds . . . First year player, and New Zealander, Steven Alker outdueled Jim Furyk down the stretch to win his first ever Senior Tour event by two strokes with a -17 finish over both Furyk and past Masters Champion, Angel Jimenez, both at -15 under. Ernie Els was fourth with a -12 under score.  For his efforts, Alker tied last year’s winner Darren Clark with a total score of 199 and he pocketed $305,000 of the 2 million dollar purse for his final round of 68.  Not bad for a rookie on tour, but it was his EIGHTH top-10 finish in the last NINE starts. The victory was his first tournament win at any level for the past seven years. It seems that this may not be the last we hear of Mr. Alker and congrats to his hard fought and well played victory.

Gene Bates, led the phenomenal redesign of Joe Lee’s original layout.  Gene completely remodeled the Old Course from the ground up, everything was new, including rerouting the entire course and adding over 10 acres of ponds, wetlands and drainage.

Gene Bates’ vision for the Old Course encompasses much more water, drainage and retention than before. He reworked a significant number of golf holes to make them more playable and added a unique “look” which will be found at no other South Florida venue.  More of a “Sandhills” feel, similar to the Pinehurst area of North Carolina.

Gene’s forethought to overall drainage, ponds and retention came to the forefront some 15 years later as 5.3” of rain fell on the course on Friday of this year’s TimberTech tournament. This prompted the cancellation of Friday’s play and 36 holes of golf to be played on the saturated course on Saturday.

Once again, it was Shannon Easter and his 52 man crew to the rescue!  Starting at 2:30 in the morning with lights, pumps and rakes they removed standing water, reconditioned the bunkers, squeegeed and double-rolled greens to have the course in amazing playing shape at 7:45 am for a double tee 1 and 10 tee time for the field to play 36 holes. The players were amazed at both the course being able to withstand such a deluge and the incredible job of the greens crew to allow the course to be playable the next morning.

Phenomenal, is not unusual for this outstanding facility, both on course and in the clubhouse. The Broken Sound Club was developed by the Arvida Corporation in the 70s. Mr. John Crean, CCM, General Manager & COO, leads a team effort to improve the environmental effects and reducing the Club’s carbon-footprint, while at the same time continuing to meet the mission statement of promoting the club’s excellence and top-notch services.

Broken Sound was only the second golf facility in the U.S. and 14th in the world to be GEO certified. They are the sustainability assurance of the international non-profit Golf Environment Organization. Broken Sound has also received Audubon Sanctuary Certification for both of their courses by using reclaimed water for the irrigation of the course and common areas, creating wildlife sanctuary areas around all the water features, they also established the first industrial golf course composting project in Florida, oversaw installation of 22 beehives for pollination, and the introduction of fifteen bat houses as a natural method of insect control. They are accredited by the Florida Environmental Protection Agency and were was selected as the Overall and National Private recipient of the Environmental Leaders in Golf Awards (ELGA). Broken Sound Club ranked as the only Florida or Southeastern U.S. based ELGA winner at the national or international leader level.

In addition to the TimberTech Senior Tour tournament and outstanding Gene Bates designed golf course, they have a lot to be proud of at the  Broken Sound Golf Club.